I celebrated my birthday this year by joining a race, because why not.

I signed up for this duathlon a few months ago. I think I just miss the adrenaline of racing. I mean, training is fun but I have been so used to training for something and having a race or an event to look forward to that it’s weird if I train and not have an end-goal. Some people say working out should be a lifestyle. But my lifestyle is winning races, how like that?

It was a 5km run, 26miles (which is 41.8km) ride and followed by another 5km run. Harmless, I thought. Since I’ve been on the bike a lot (erm, on the trainer because I hate riding in the cold), I thought let’s do it. And I want to keep my running going from the half-marathon too. Oh and I’m also still not very good at the miles-km conversion. (I hate the fact that US is so different in so many ways- the miles, the degrees Fahrenheit, the pounds. Guys, seriously, can you just use what the rest of the world is using? So apparently, I heard on a podcast saying that the fact that US is still using pounds instead of grams/kg is causing alot of problems in the health care industry. Medications prescribed to patients are often in the metric (aka international) system and in the US, the need to covert to the imperial system leads to inaccuracy and inefficiency. Seriously.)

So, I know that it was going to be a wet race day based on the weather forecast. We reached RI pretty early. I registered and not only got my race pack and got my age written on my calf! They should have written “31” on my left calf and “today” on my right. Went to prepare the transition area and saw all the pretty super bikes and got a little intimidated. 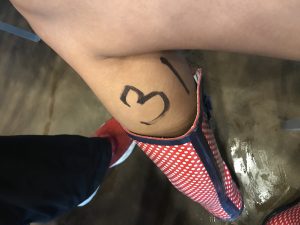 Went for a little jog for the warm up and next thing I know, we were at the start line, waiting in the rain. The first few metres of the run was a little hill, which was probably the only hill in the run. I wanted to keep a pace of 4:35 (which I thought would be okay since I finished my half marathon with a 4:39 pace), there were alot of fast runners, and I was doing a 4:31 split. There was a girl who looked like a legit triathlete who was long gone at the start of the race. A lady passed me towards the end of the 5k and another one was right behind me. OMG THE PRESSURE. The transition was pretty smooth except that these athletes were jumping on their bikes and I was slowly putting my leg over the bike and pushing it off, but the first bit of the ride was a hill and I was leaving them behind.

Later, I found out from the results that my transition was a slow 48s and the girl who came in first who also later I found out is a legit triathlete did hers in 18s.

The roads were wet and I was afraid of making fast turns. The first 10 minutes or so on the bike was hard. I felt slow, my legs were absolutely tired. There were some little hill around the park area and I felt as though I was putting in too much effort to overcome these little bumps. Once outside the park, roads were pretty flat, except for a few sharp turns. I tried to keep my speed at 20mph as much as I can because I don’t know how fast I should be going or is capable of going.

One loop around the neighbourhood was 20km and we had to do 2 loops. It felt really long and I was tired. (I really need to get more time on the bike, don’t I?) Finished the bike in 1:17hr.

After the bike, I jumped off the bike and almost fell because I couldn’t feel my legs. It’s so funny how everyone talks about the infamous brick work (bike to run) that you have to do when you train for triathlon, and I only did 1 brick training and not even at full intensity. Bad idea. Thankfully I didn’t fall but when they say your legs will feel like jelly, they were definitely not kidding. (Oh and also, jelly in the US is the jam you spread on your bread. And jelly is called Jell-o which is weird because Jell-o is a brand. Yes, sometimes I get annoyed at the words that Americans use which don’t make sense and makes my life difficult!)

There was this lady at the transition area who was saying something like, “you still look strong, get her!” To which I am assuming she wanted me to catch up to the first girl who’s nowhere to be seen since we started the race and I definitely think she is assuming that my legs were as fresh as daisies. MY LEGS WERE NOTHING LIKE DAISIES, more like kelp (cuz the wavy-ness of kelp/seaweed reminds me of jelly legs and because they are underwater, when you put them on land, they are so soaked they feel heavy. I’m going to create a new simile: MY LEGS WERE HEAVY AS KELP. And the 5k was just fkn miserable. All I was thinking was, DON’T LET ANYONE CATCH UP WITH YOU. That kept me going.

When I crossed that finish line, I was in so much pain but strangely, the most pain I felt was on my shoulder. So story is, I developed tendonitis on my right shoulder after doing my first ever half marathon in 2014 because I was holding on to my phone throughout the whole 21km and at the end of the race, I couldn’t move my shoulder. The soreness on my shoulder comes and goes and comes especially when i do long rides and runs. I mean, my legs were tired for sure. But I felt it more on my shoulder.

Ross was there to give me a hug at the finish line. (He’s such a keeper, isnt he?) He told me to go right to the massage area to get free massage and the massage therapist went straight for my calves but I was like, can you do my shoulder please? I felt so bad that she had to do what she was doing because I was sweaty and gross af.

The best part of the race was the post-race breakfast spread. SO MUCH FOOD. But there’s something about finishing races where I just don’t feel like eating. Is that normal?

Came in second in my first ever duathlon! Happy that I managed to bring home a medal and thought it was such a good way to spend my 31st (am I weird?). We drove home and Ross took a longer nap than I did. Maybe supporting your partner in a race can get pretty tiring! Haha!

Here are some photos that I took from the official photographer’s website (because I’m too cheap to buy them). 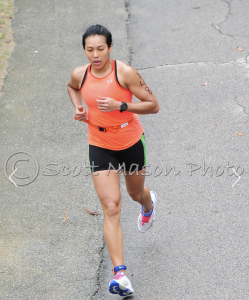 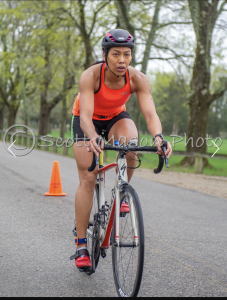