The Singapore Aquathlon- another first!

23 Oct The Singapore Aquathlon- another first!

Posted at 16:55h in Blog by Aisyah Gala 0 Comments
Share
I wasn’t looking forward to the race. It would be my first Aquathlon and my first 1.5km in the open sea. I have ran a 10km race in Sydney before, of which I came in 3rd with a timing of 44:11mins. I haven’t been anywhere near that time since then.
I have only started swimming at least 2km each time a week ago, I haven’t been in the open sea since my first triathlon in Aug. And I just started on this 80/20 training which I haven’t really put my trust in because I feel slow on my runs but Coach Michael said I have to keep my HR below 150 for the long runs.
Let’s be honest. I didn’t want to race cuz I didn’t want to suck.
But I packed for the race anyway and found myself making my way to East Coast Park at 6am on race day. I wasn’t as prepared as I was for the triathlon. I hate not being prepared. I only collected my race pack the day before the race and was googling “what to pack” and “transition area for Aquathlon”. 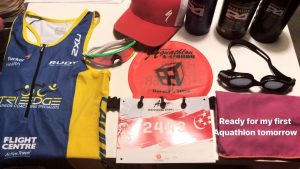 I’ll treat it like another day of hard training, I told myself.
As usual, the swim scares me. The water looked calm when I arrived at the race course, and it was still fairly calm when the first wave was flagged off but as soon as the second wave went, the waves started rolling in. I was in the 4th wave. There weren’t many ladies in the standard distance cat- 43 I believe.
It was 4 loops of 375m. I thought since it was my second open water swim race, the “washing machine” madness would be fairly easier but it’s not. In fact, it was worse because the madness wasn’t only at the start. The course is short and that means you’ll meet the swimmers from the previous wave and the wave after and the corners were just horrific- straight out of a scene of a zombie apocalypse. And I absolutely hated the corners. That is where you feel all these arms and legs around you and it makes you wish you were a faster swimmer so you can escape this madness as fast as you can but I can’t swim fast so I just had to bear with it until they all swim past me.
On the second loop, I almost wanted to stop. I can’t believe the idea even crossed my mind but it did. I wasn’t tired but just frustrated because my sighting was terrible, there were constantly limbs everywhere and the waves were just crashing on us. All of a sudden I forgot how to breathe and found myself gasping for air instead of taking in breaths. I hated it, I hated the swim so much. I told myself that once I’m out of the water, everything will be okay. I put my trust on that. So I just kept swimming. Just kept swimming.
I was so glad the swim was done but when I glanced at my watch, I saw something like 49mins. The horror! (I’ve been doing 2k in the pool in 50mins.)
Surprisingly, I felt good during the run. It wasn’t as hot as the first tri in Aug, that’s why when I crossed the finish line, I wasn’t as tired either. Or maybe, just maybe, I didn’t push hard enough. ????
So the official results are: 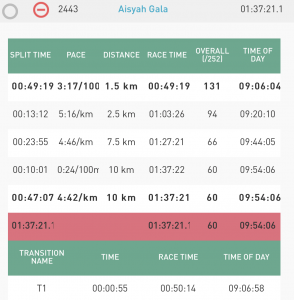 I improved my swim pace from 3:40/100m to 3:17/100m and increased my speed on the run from 5:15min/km to 4:42min/km. Not great timings but improvement is motivation, right?
And now I know why these triathletes go crazy over Vaseline. I couldn’t walk properly the whole day after my race. ???????????? something I should invest in next time!
And because I had to rush to the hospital immediately after my race after finding out that my bf fractured his foot, I didnt get to recovery properly. But seeing this face, I guess, I’d do with a week of soreness: 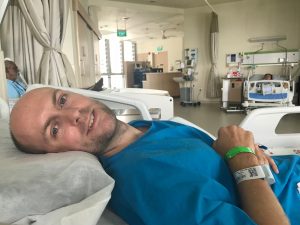 I was absolutely sore the next few days- and when I had to see Aylwin, my massage therapist, for our monthly session, I was close to punching him in the face while he was trying to release my abductors, hamstring, calves and that part behind the knee. :’(((
I missed my opportunity to stand on the podium too. It was only a few hours later that I found out that I came in 1st in my age category (Female 18-29). Well, not bad for my first Aquathlon to come in 1st in something. 🙂 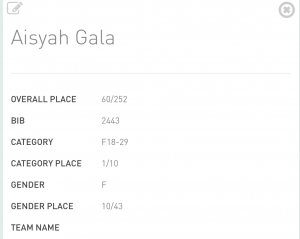 But anyway, all good. I survived Aylwin’s elbows, I survived my first 1500m open water swim. Many good things lie ahead I guess! xx 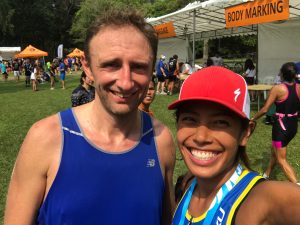 And here’s the only photo I took at the Aquathlon with a fellow Easter Rowing Club member.