My First Ever Open Water Swim

Posted at 13:01h in Blog by Aisyah Gala 0 Comments
Share

The organizers of the upcoming Tri-Factor race organized an open water swim clinic last Sunday at East Coast Park, which was thankfully cleaned up after an oil spill a few days before that.

I was pretty excited for it and scared sh*t at the same time. I have to admit it was scary. The last time I was in the open sea, I had a surf board smashed into my face and broke my nose, fractured my orbital bone and tore my retina. Since then, I have always been fearful of the open sea and waves. 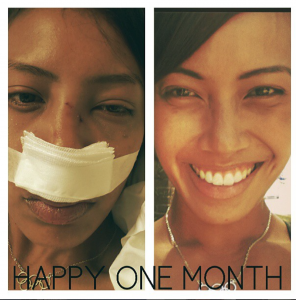 So, for me to step into East Coast Park the other day was a feat. I guess what made me feel okay was the fact that I wasn’t the only one who was afraid. It’s always good to know that you’re not the only one who’s a complete noob.

The Swimming Room conducted the open water clinic that day and the instructors were really good, so I guess that helped too. I has some freestyle/front crawl swimming lessons in Sydney- a total of 4 hours- but that was in January. When I dislocated my shoulder, I haven’t been swimming for 5 months. So how did I get back into the pool after a long hiatus from the water? Like the Malays say, you just have to “go jer, don’t scared.” Also, I have to give credit to YouTube for the unlimited resources of swimming videos they have!

Some lessons I’ve learnt from swimming in the open sea:

All in all, we swam about 300m that day in total and I was stuffed. HAHAHA. I really don’t know how I am going to survive a 750m swim on the actual race day, followed by a bike and a run.

Do something that scares you everyday, they say.

Now, that it’s official –> (http://www.todayonline.com/sports/spore-rower-aisyah-race-tri-factor-triathlon) This is it, guys.