A chance of protein balls and shower

21 Mar A chance of protein balls and shower

Posted at 04:51h in Blog by Aisyah Gala 0 Comments
Share

The weather in Sydney has been really sticky and wet recently. Mucky, with random bleeps of sunshine, uncomfortable, nothing you’d wake up to and tell your friends that it’s a beautiful morning cuz it isn’t. But hey, I am not complaining because rain or shine, I have the bike literally seconds away from my bed. I still train even when there’s a flash flood outside, no excuses. Spending ALOT of time at home has also made me experimental.

Recently, I’ve been addicted in making various versions of protein balls. I reckon they’re pretty easy to make and so easy to pack for snacks. They’re also packed with the good bits that I need to meet my daily nutrients needs.

I’d eat a few balls (2-3) in the morning before I train, otherwise they make good post-workout snacks as well. Even in the middle of the day, when I feel like munching on something, I’d go for a ball. They really do fill you up!

So I got the basic recipe from thehealthymaven.com and I’ve added bits and pieces of my own ingredients just for variety. Here’s the recipe found on the website:

So I used my Herbalife powder for this: 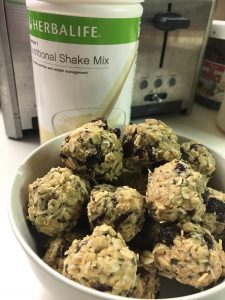 -added in a cup of shredded coconut

–cranberries goes so well with the oats

–soy milk instead of milk for those who are lactose-intolerant

A thing of two about the Herbalife Formula 1 shake that I use is that it contains pretty solid stuff in there that I found out is actually good for my recovery stage (i.e. shoulder dislocation drama, remember?)

So the F1 actually contains:

So yea, I thought it’ll be good for me to share the good stuff. Go give those balls a try! 🙂