Posted at 19:55h in Blog by Aisyah Gala 0 Comments
Share

It has been three weeks since I’ve been here in Philadelphia. I love it here. The people are nice, I’m training with a good bunch of rowers at Vesper Boat Club and Philly is beautiful- and cold. I’m still getting used to the chilly weather but I shall not whine about how cold it gets here cuz everyone knows the Singaporean who is used to the 30 degrees weather is definitely gonna suffer. I am so looking forward to that. Also, the aftermath of not rowing for 2-3weeks is having the most beautiful palms in the world. I won’t be stingy so here is a photo of my beautiful palm: 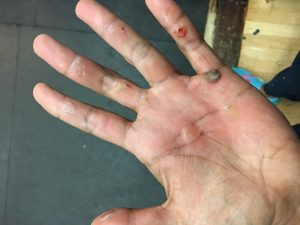 Rowing with these sore hands have been ridiculously hard and this sounds silly but there was one night when I cried myself to sleep because they were hurting so much. HAHAHA. omg, such a weakling! But I’m so grateful that phase of horrendous open blisters are over. Now I (and whoever is willing to hold my hands and fall in love with me) have to just deal with the rough, calloused hands.

The past three weeks haven’t been the best weeks of my life. In fact, I find myself crying to sleep almost every night. Could be the PMS, could be just that this is exactly what I was searching for- being out of the comfort zone. Even weeks before I flew to Philly, I had a hard, hard time having to make a decision of whether I should continue to train in Sydney or experience a whole new training environment elsewhere. Or there was even a period of time where I was considering the question on: should I continue to row?

I know I have so many rowing goals ahead of me and yes I talk about Tokyo 2020 and I really want to get my ass in the next Olympics because I don’t stop at one. And as much as I think being 28 is old, some Olympians peak in their 30s and I still have time in my career, but I’ve been in this for 12 long, arduous years. That is seriously a long time and thinking about putting in another 4 years or so of hard, dedicated training isn’t something that you just don’t jump into and do it. You gotta commit and to be able to hang on for that long, you gotta want it so bad and you need to own it. You need to know the amount of sacrifices you have to make, the time and effort that is going to be put in. That, my friends, is how you bloody chase for a dream.

So many people I sought for advice, so many plans and suggestions thrown at me, so many paths to choose from. On the down side though, having too many choices can create a dilemma. You have no idea how much stress it has caused me. It made me realize that sometimes, it is so much easier when you’re left with only one option and you just have to take it and deal with it. But life has been kind enough to offer me choices but like ever so often, nothing comes free in life. The luxury of having choices became a burden to make the right choice- but bloody hell, I’ve learnt that there is no such thing as the right choice.

Here is an article which helped me make the decision after pondering over the issue for weeks, which might be useful for you at some point in life. Read it!

To be honest, whatever decision I made would definitely be better than being indecisive. So I made the decision to train in Philly on my own. That’s how I ended up here in this big city alone.

One thing I’ve learnt about making hard decisions is that a million people can tell you a million other ways to do things but what is most important is what you really want and how much you’re willing to accept whatever consequences there are with the choices you made. And there is never an option to make everyone happy. There will be people who get hurt, hate you, want to see you fall. (Oh God, I always wonder why some people are just so keen to see you fall, how cruel can the world be?) You just breath in, and out, and feel sorry for these people who constantly try to bring you down but you refuse, refuse, refuse to give in.

Sometimes when I feel like I’m holding back on water or feeling so utterly lazy to hit the gym, I think of all these people who would be so goddamn happy to see me fail. And then it makes me even more motivated to train- so bloody hard. I say this all the time- you hear me repeat the same things over and over and over again. About how these haters will only motivate me to train harder. Because the feeling is real. When you’re in the position where you question why you have to drag yourself out of bed to be on water when its friggin 3 degrees outside and you can come up with the lamest excuse not to train and no-one will fault you on that, these are the moments when I think about these things I tell you all the time- I need to be on water because I need to prove the world/myself/him/her/them wrong. It works.

I must say it has been a challenging three weeks having to live alone with no family or close friends around.  I tried to recall how I survived Sydney when I went there for the first time 3 years ago, but then I realized that I was living with the kindest and most caring couple ever which made me feel right at home and I had fellow “foreign” rowers and because we suffer the same fate of being alone in a foreign land, we became good friends. Everything seems so much harder now because it has been a long time since I am being alone- even without my coach who never left my side for months after months leading up to the Games.

I miss my coach but I think this period away from him is good for me. I want to feel uncomfortable. I want to know that I am still capable of fending for myself, survive on my own, even when I’m thrown out there into the big, cruel world. I don’t want to be in a position where I start taking things for granted.

But then again, I knew this was coming and Ruth Chang (from the article I linked earlier) said that if I make a decision, I have to bloody hell commit to it. Well, she didn’t exactly said “bloody” but she might as well because it’s true. I kinda expected this to happen, having day after day of sitting alone at home, dancing around the kitchen to Pachelbel’s Canon, playing the ukelele whilst singing at the top of my lungs just because no-one is at home and spending the whole day with myself. I’ve been listening to heaps of podcasts- some motivational, some hilarious, some informative. I feel smarter now. And then, there was this interview with Maria Sharapova on one of the podcast channels I subscribe to (or you can watch the video here) and she said that sometimes she’ll spend hours and days on her own in the hotel room. It’s hard but she learns to deal with it. Well, then if Sharapova is doing it, so can I. #rolemodel

Training is, well, like what every training should be- hard. It was hard initially to get back in the boat, but I constantly reminded myself that the beginning is always the hardest. Eventually, when I got into the rhythm of it, things got a bit better. I miss the girls back in Sydney and I miss how beautiful how Sydney would be in the Summer but if I constantly look back in the past, how the hell am I supposed to move forward. Right, right, right?

Sometimes I wish doing it is so much easier than saying it.

I really think I shouldn’t be complaining because life is good- not perfect, but good. And I am grateful for everything that I have right now. I remembered a year ago, around this period, I put up the Christmas Wish List where I needed some sports bras because my chest has grown from all the weight gain, a new running shoe because my old Kayanos are running out of life and some cycling gear and my wishes were fulfilled by the most amazing people. I remembered the moment my ATM card isn’t working at Coles and I had no cash on me and I had to return the stuff and walk out of Coles terribly embarrassed. I remembered how awfully broke I was. I remembered so vividly how much I cried because I didn’t know what to do. I remembered having to ask people for help- omg, the horror. And this year, I am in the midst of getting a deal with a training shoe company and I am being sponsored. I’m not saying I’m living the lavish life of an NBA basketball player but I am comfortable.

The best advice I can offer to anyone out there: Be patient. Be bloody patient.

I never thought I’d be sitting here in the middle of the day in an apartment in the middle of Philadelphia, eating kale salad with blue cheese crumble, and waiting for my next training, planning to have another adventure this weekend.

I cannot believe the best year in my life is coming to an end. Let’s put an end to it in the best way possible.

Thank you, life, for all that you have given me.