Posted at 04:00h in Blog by Aisyah Gala 0 Comments
Share 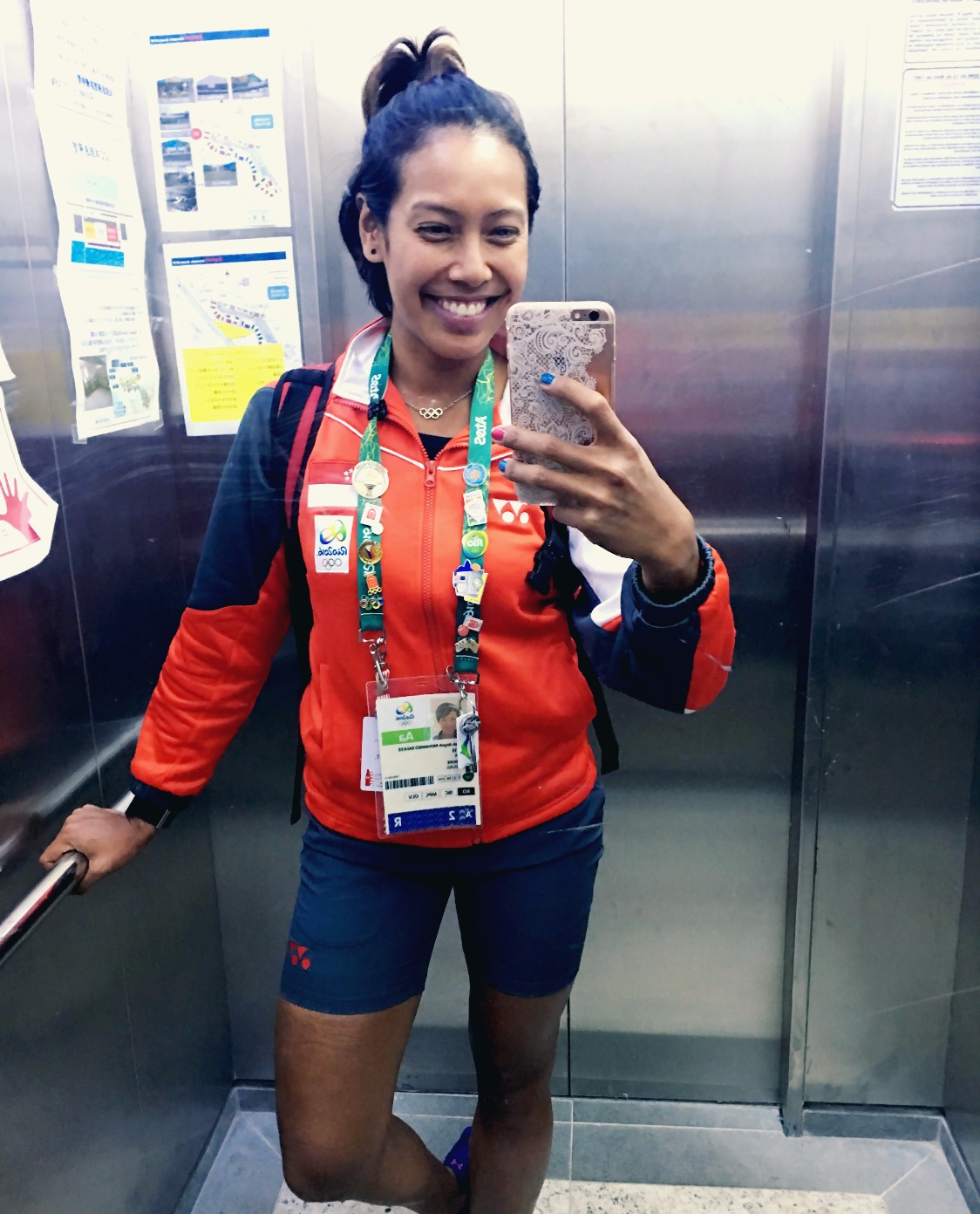 So, of all the photos with the Olympics rings and anything Olympic-related that I have, I have decided to use this lift selfie that was taken in the Olympics Village for today’s post. Because…why not?
Latest updates!
1. My hair is long! Can’t you tell from the awkward, fountain-looking thing that is spurting on top of my head? The warm Brazilian weather was making me complainevery single dayabout how much I want to snip my tresses (or lack thereof) but fortunately (or unfortunately in my case) there wasn’t a salon anywhere in the places where I was allowed to go to! Well, there was a salon in the Village Plaza but can you believe it that they only cut guy’s hair and do braids and ribbon-things on girls hair? I was like so much for gender equality!
2. My Yonex shorts are SHORTS and not tights. Tells you a lot about how thick my thighs are and how much I don’t care about what you think about my thighs because I love them whether they are thick or big or brown or burnt. The only problem I have with them is when I am buying jeans. JEANS ARE A BANE OF EVERY ROWER’S LIFE. BOO YOU, JEANS!
But hooray to skirts and dresses.
There you go. The latest updates on Aisyah’s life. HAHA!
—
RIO
was amazeballs. No other way to describe the whole experience. From the moment we landed and I received my accreditation card (which made me officially an Olympian WEEHOO) to the Games Village which was constantly bustling with activities, to bumping into my sporting idols- Sonny Bill Williams (OMG BEST DAY OF MY LIFE) and taking a photo with a grumpy Usain Bolt and accidentally deleted it (in which you might think I am just making up a tall story on meeting Bolt but its okay) and having the honour of watching Phelp’s last race. Being there, being amongst the world’s bests athletes, eating the same food as them, walking the same road as them, breathing the same air as them!!! OMG talking about Rio makes me want to do it all over again.
4 years.
We shall see. 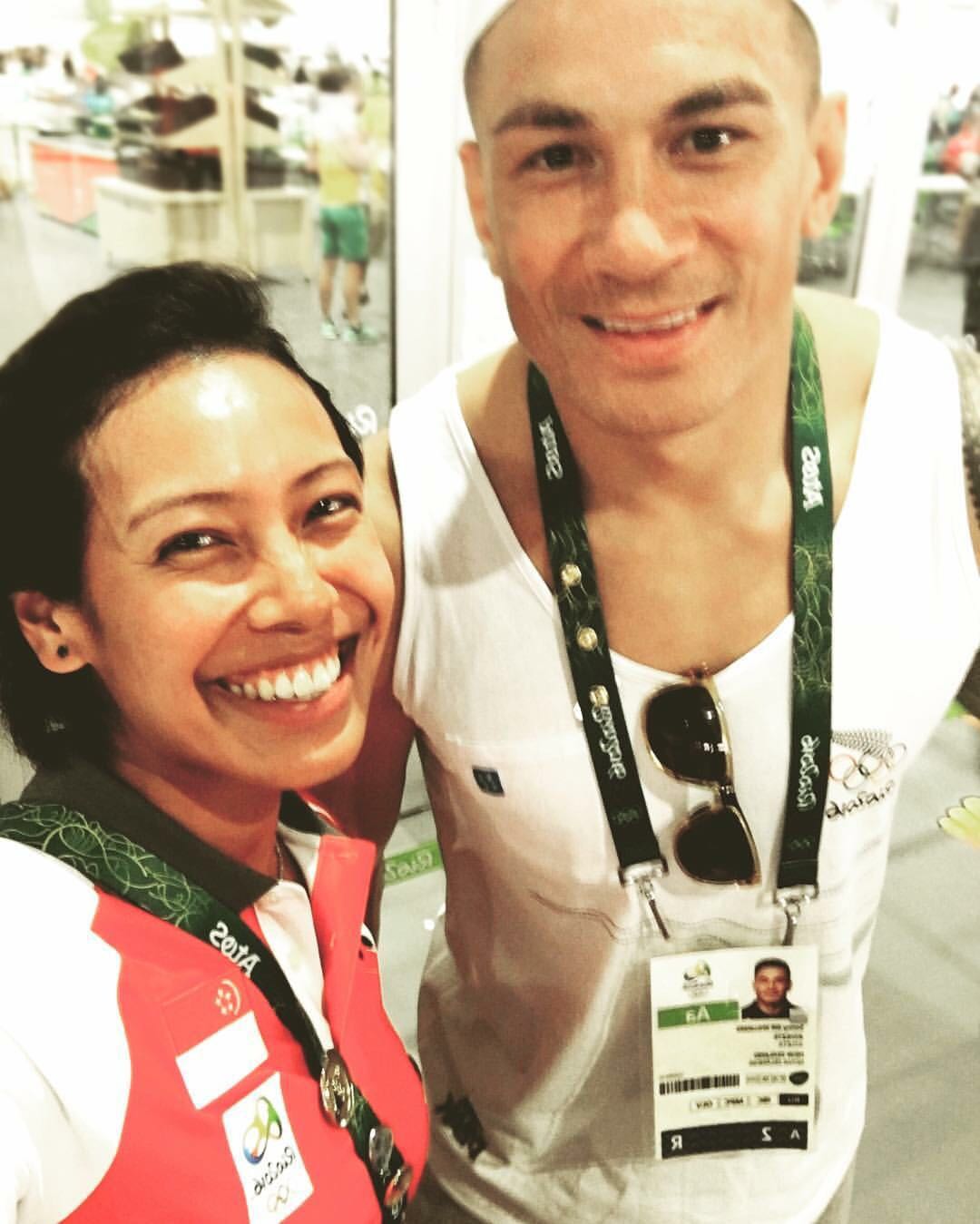 MY LIFE IS COMPLETE <3
RACES
The best part about the races was knowing that Singaporeans were actually looking forward to watch a rowing race which doesn’t exactly happen very often. It made me feel a little proud knowing that although my family and friends couldn’t come over to Rio to watch me race, they were there sitting in front of their TV and computer screens cheering me on.
The heats was possibly the best out of the 4 races I rowed at Rio. I remembered rowing to the start line in the ridiculously choppy water and telling myself how exciting this is going to be. And because I went out there without any pressure and expectations, without fear and worry, I came in 3rd and qualified for the Quarter Finals. Which is a pretty big deal for an Asian sculler.
And got a little mention from the PM himself. #superhonoured 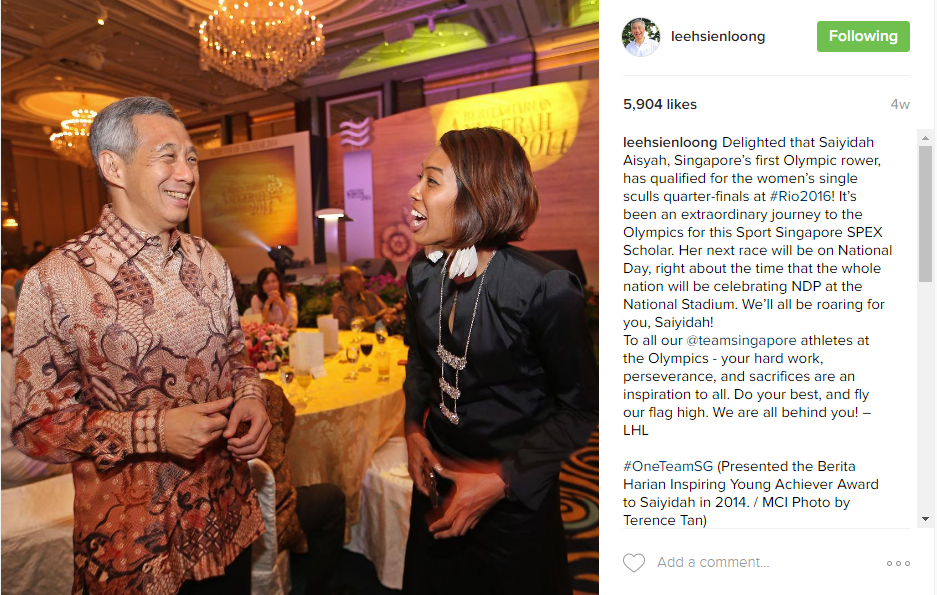 The races the following days were postponed due to the crazy wind which was a bit unfortunate because I quite enjoyed the crazy water. But anyway, the next race was the Quarter Finals, where I was up against an Asian Champion, a World Champion, and an Olympic Champion. I went into the race feeling fearless. I remembered doing well in the first 1000m where I kept up with the Asian Champ girl and got a little too excited and couldn’t refocus back to my race plan. I went from 3rd to 6th position and couldn’t find the strength to push in the last sprint.
That was the race which the Minister was watching along with some pretty important people from the Singapore Embassy in Brazil. It was devastating to have put such a poor performance on my end with all these people watching. I remembered my coach being so angry at me and I was crying incessantly during the post-race talk and later after I’m finally done crying and feeling sorry for myself, he said he has to be hard on me because he cares for me. And that, made me cry even harder.
I guess he is right. I mean, of course he wants the best for me, otherwise he wouldn’t be giving a damn about my races and how I perform. If he didn’t care, he wouldn’t have been mad at me for such a terrible race. If he didn’t care for me, he wouldn’t have been there for every single training session- even when he is feeling under the weather, even when it is freezing cold out there, even when it is pissing with rain. HE IS THERE.
Not qualifying for the Semi-Final A/B meant that I was put into the Semi-Final C/D. To be honest, I don’t recall much about this race. It wasn’t a great race. I came in 6th.
I hated myself right then. I have allowed all these doubts and insecurities to eat up my mind and I didn’t retaliate. Day after day, they grew stronger until it reached a point where on my Final D race, I allowed them to take control. The girl you saw racing in Rio, she might very well be Singapore’s fastest female sculler, but she wasn’t the best version of herself. She wasn’t the person I wanted to become. She wasn’t the rower who qualified in Korea in April.
I know it sounds crazy because in the Olympics, every athlete want to be here to give it their best shot and perform to the best of their abilities and if not win, they want to show that they can and they try. But I have failed myself to achieve that. As much as I would like to cover up my downfall with cotton candy and sparkles (and the fact that I actually improved my Asian ranking from 7th to 3rd), I have to come into terms with myself that I had an awful series of racing in Rio and there is definitely something that needs to be done to get my out of this rut. I have to admit my defeat and be honest to myself, and also to you guys that I didn’t race to the best of my abilities in Rio. I wish I could have gone faster, I wish I could have told my doubts to shut the hell up and let me be myself, but there is no point wishing for something I can never change. Now, we look forward and go from there.
Not everything was sunshine and rainbows you see. Sometimes you win, sometimes you lose. But these loses are what you take home, mull over them for like a few hours (make sure they don’t extend to a few days) and then you tell yourself to get your ass off the ground and fight on. Noone likes a loser. Noone remembers a loser. Everyone likes a winner, but there can only be one winner. If you happen to not be the winner, be the one who fights. Everyone loves a fighter.
—
I have 20 more hours left in Sydney before I fly off to Shanghai tomorrow morning for the Asian Champs. After the Asian Champs, I will fly back to Singapore for 13 hours before flying off to America for my break. I’ll be back in Singapore from 27 Sept to 13 Oct before going off to Pattaya for a coaching course till the 24th Oct.
So the exciting thing that I will be embarking on after that is  the fact that I’ve chosen to freeze my ass off in America in Winter in Nov and Dec instead of working on my tan under the Sydney summer sun. And why, you wonder, have I decided to put myself in such a crazy situation? Because they say, life begins when you’re out of your comfort zone.
Other than having 28 things left to check off my "things to do before I fly off to China" list, I have spent the last few precious hours writing this entry because I owe you a Post-Rio story. I am also pretty impressed with myself for having spending the whole weekend packing my bag for the rest of the year, with the help of RR who has been really good at kicking my butt to get things done but at the same time pissing the s*** out of me.
(Note to self: cut out on the vulgarities)
I need a manager, or a personal assistant. I need a clone.
I NEED TO MAKE TIME.
I wish my time management skills was as good as my selfie skills. 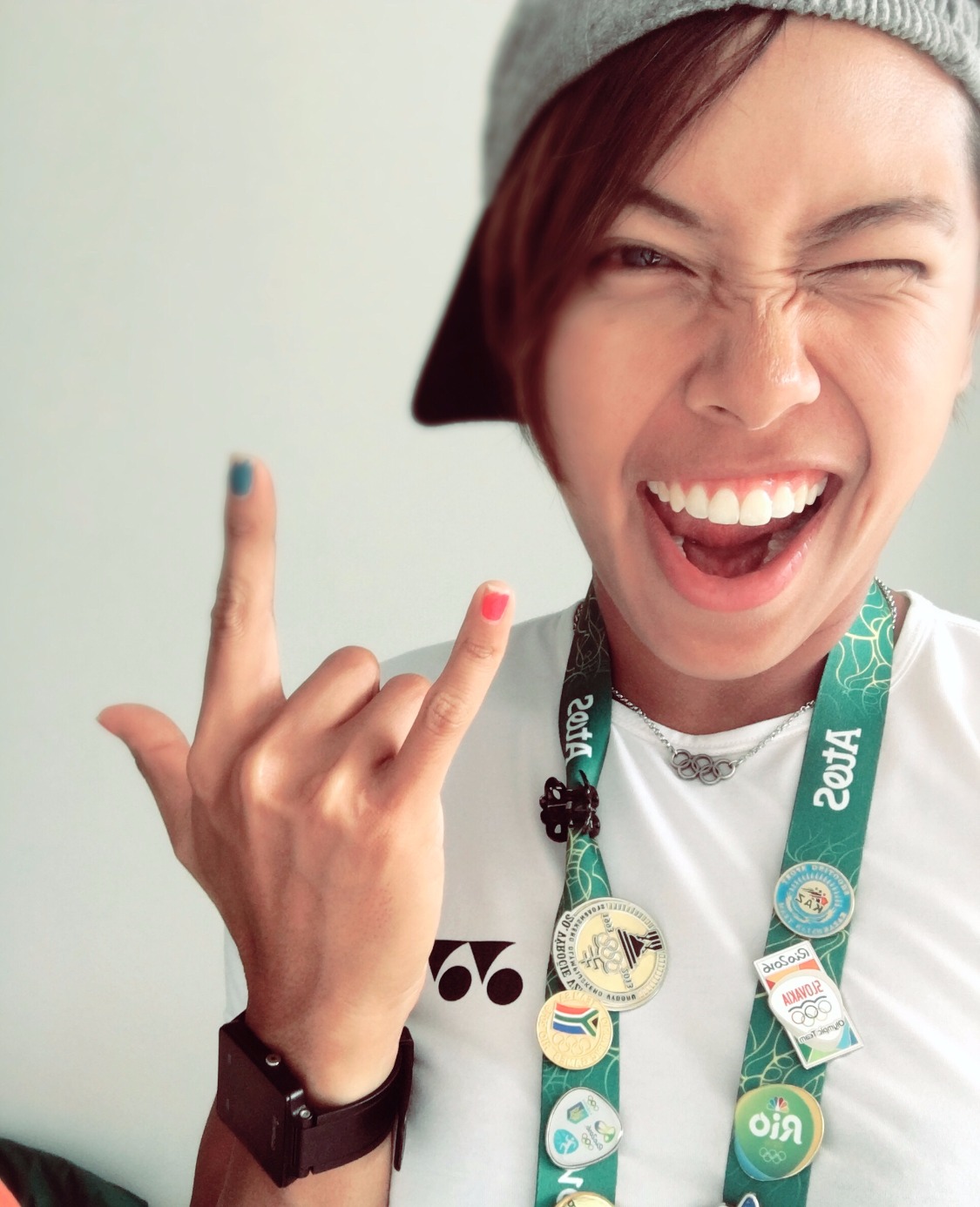 I thought I’d post a selfie here just to showcase my selfie-taking talent
One thing I’ve learnt this week from Uncle Bay of Mental Edge is that sometimes you gotta take a break, smell the roses, go for a walk, RELAX and doing all these things will actually make time and not waste time and he was absolutely right.
Shanghai –> Singapore –> New York –>Philadelphia–> Singapore–> Pattaya–> Singapore–> Wherever life brings me.
More updates when I get my life sorted.
Love you guys many many.
x