Posted at 08:38h in Blog by Aisyah Gala 0 Comments
Share 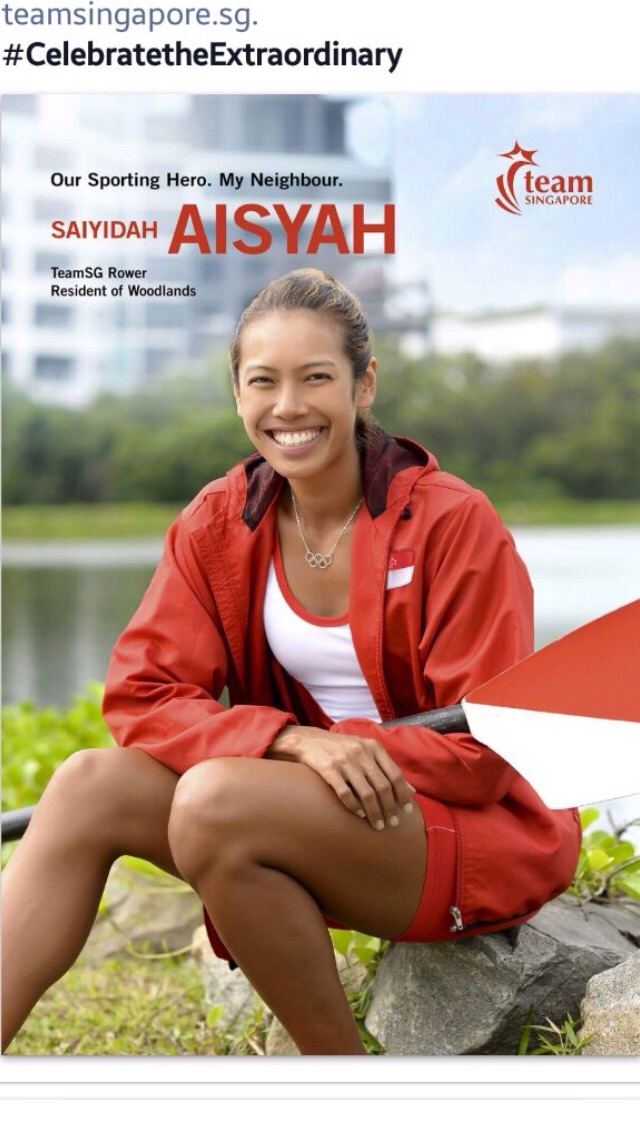 When this poster of me was brought down from the huge banner placed right opposite Marsiling MRT Station on Sunday, a tiny bit of my heart was torn apart. It meant that the Games was really over.
It is time to move on.
The Games went past too fast, but this time, I was prepared for it. I knew it was going to go by in the blink of an eye, so I made sure that I spent every day to the fullest. I made sure I treasured every single day that led up to the Games. In Sydney, I remember waking up jumping out of bed, looking forward to every training session. I remember those days when it was just too cold outside to train and the Winter mornings weren’t very kind to me. But I still showed up for training anyway, rain or hail, and got on the water and loved every bit of being on the boat. I remember those times when I ask myself why do I have to do this alone when everyone else has a partner or a team to train with. And then I slapped myself back to reality, convincing myself that not everyone has this opportunity to train full-time and stay in Sydney so I should bloody hell just shut up and train. I remember those hour long drives to the race course when it was still 4:30am and my eyes felt like there were elephants on them and I discovered the beauty of audiobooks and espresso, and sometimes Diet Coke in times of emergency. I remember those hard training sessions that make me want to jump out of the boat to kill my coach, but secretly and masochisticly, loving that point of near death when I push hard, my breaths heavy, my heart pounding, legs numb. LOVE IT. I love it because I truly believe that what doesnt kill you make you fckg stronger.
And then the Games arrived, I came back home from a freezing winter to a sweltering heat. It was ridiculously hot and humid in Singapore that making weight for my event seemed like a breeze. During the Opening Ceremony, I was in the marching contingent. After 11 years of rowing and 5 SEA Games, this is my first OC experience ever. It was AMAZEBALLS. No balls in this world could describe how excited I was and how amazing the experience was. Every moment marching past the millions of viewers, I thought to myself, I want to do this…at the Olympics. The SEA Games Opening Ceremony was like the preview.I want the real deal. 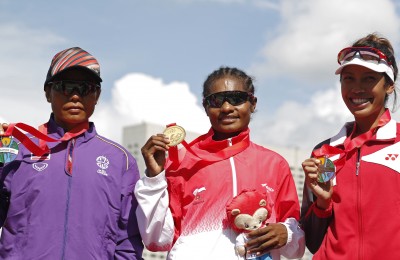 My first race was the 500m final. No heats, no preliminary races. Just the finals. The last time I ever did a 500m race was in Dec 2013 when I capsized 5mins before the start and had a pool of water in my boat when I managed to pull myself back into the boat again. I won in that race, with a boat filled with water. More like, I won that race because I was pissed that my boat was filled with water. This time round, there were no dramas. Just 5 boats, 3 medals for grabs, and 2 competitors I’ve beaten 2 years ago when I clinched the Gold. I dont remember much of the race other than the fact that when I crossed the finish line, I wasn’t first. Neither was I second. But it didnt break me. It didnt make me want to cry because I didn’t win. Of course I wanted the Gold but I swear I was rowing hard. At that point of time, that was the fastest I felt I could have gone. I gave it my all and it made me clinch the Bronze. To think about it, if I had taken this result in another way, I would have been all teary-eyed on the podium. I would have allowed my emotions take control of me and I would have been so devastat​​ed and angry at myself. It could have fired the desire to want to push even harder for my next races, or it could turn the other way around and made me perform even worse in the next few races. So I’m glad I told myself, you’ve got the 1000m babe and kept my chin up. This is just the warm up.
The preliminaries for the 1000m was on the next day and I was in 3rd position, which usually doesn’t mean anything because you’ll never know what games your competitors were playing- whether they were giving their all for that race or saving it up for the finals. All boats qualify for the finals anyway.
I was pretty confident on the day of the finals of the 1000m. I’ve done the training, I’ve been through all those crazy sessions with my coach, I’ve went through the race plan in my head at least a hundred times already. All I have to do is to show up at the start line and deliver. There is not much that you can do to change things when it comes to hours before your finals. The only thing you can change is your mind. How much you believe that you can conquer this.
The winds decided to play around that morning, blowing in all directions and finally settling on giving us a head wind. Ahh, the head wind. Being the biggest (physically) amongst my competitiors, having a headwind would give me an advantage. Before I carreid my boat to the launch pontoon, my coach’s wife whispered to me, "This is your kind of water." She’s right.
Light and bright. Strong and steady. Let it flow. Let it fly.
I was so proud of myself that despite the huge cheering squad on the spectators stand by the banks of the river, my focus game was strong.
I only remembered the second half of the race when the field crossed the 500m mark and you can hear the cheering from the banks. It is a sign to dig deeper. I wasn’t in the Gold medal position and I can’t wait any longer to attack because the finish line is near. I saw the Indonesian in the corner of my eye. I counted 10 strokes. And then she was right next to me. But the Thai was nowhere to be seen. I counted another 10 strokes. I heard a beep which indicates that a boat has crossed the finish line, and my heart almost broke when it wasn’t mine. And within seconds later, 2 more beeps. I was 0.8s away from a silver medal and heaps (about 2s i think) away from the gold. 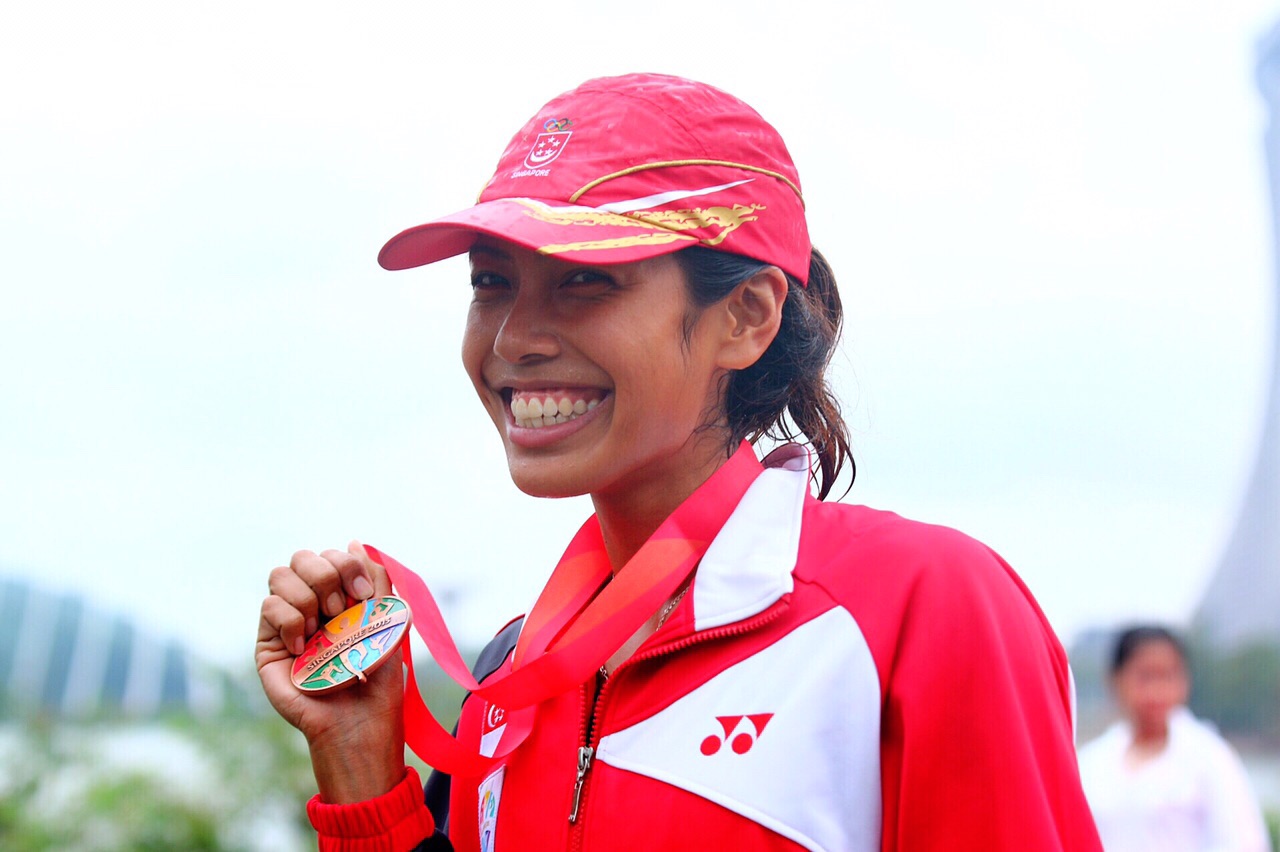 I remembered being sad for a while and then lifted my head and smiled. As long as you know for yourself that was the best that you could have given at that point of time and when you step out of that boat, you can bravely say that you have fought on the battelfield with your heart and soul, then there is absolutely nothing to be sad about…
…Until the moment you reach home and you caught sight of the Gold medal from the 2013 SEA Games.
I’m kidding. I AM ABSOLUTELY OKAY.
Of course it feels different winning a bronze medal after you know what it feels like winning Gold. Of course it would have been more memorable if you had your supporters sing the Majulah Singapura along with you if you had had won the Gold. And of course in races there ought to be winners and losers.
So we move on. We keep our heads high and ours chins up. Because we know this event doesn’t determine whether or not you qualify for the Olympics Games. It is nowhere near determining anything other than who is faster in shorter distances. The results shouldn’t affect my chances in getting a scholarship or a sponsor becausemy Olympic dream is still onand my Olympic event is an open weight event across a 2000m distance.
Now that I’m back at work after a year long leave, I am still trying to get used to the working life again. On the second day of work, I had the sniffles. I was sneezing incessantly and my nose was leaking. And then there was the fever and the awful sore throat. And the pus in my eyelids.  It’s been a week and I still feel tired and weak. I haven’t touched my oars or the boat for 12 days and I’ve got another 4 more days to go before water training commences again. I attempted to run on several occassions hoping that sweating it out will cure this horrible disease that is invading my body but I ended up just shuffling around the stadium tracks, puffing and heaving like a tired dog after like 10mins of moving my legs. ugh. i had to see the doctor twice because the first doctor’s prescriptions didn’t seem to be working aye. And the cost of consultation + medicine hit me like a rock. $70. Bring me back to clean, fresh Sydney air please. 🙁
I will be heading back to Sydney on the 31st of July, hoping I can squeeze in time now to earn some cash, top up my savings which has already gone dry and meet up with friends whom I’ve shoved aside in my selfish pursuit in my rowing dreams. I get to spend Ramadhan and Aidilfitri in Singapore this year too. And being at home gives my mum a chance to unload a year’s worth of nagging upon me.
The next plan is the Asian Olympic Qualifiers which will be in April 2016. For now, like they say, it’s back to the grind. xx